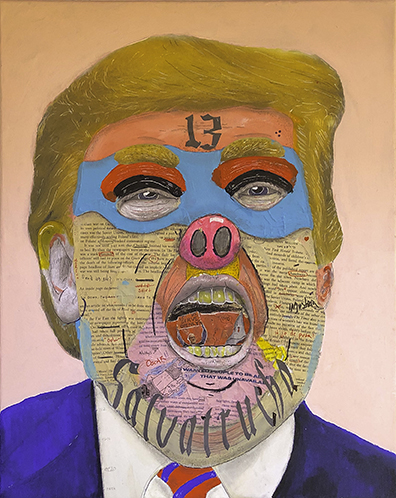 Edgar Moza is a visual and graphic artist hailing from El Salvador. As a Latinx immigrant, he feels compelled to confront media stereotypes that plague immigrants. He believes Latinos are always portrayed as gangsters, uneducated criminals or welfare leeches. Edgar is working on a new series entitled “La Mara,” a direct critique of the way America wrestles with MS-13 gang, a scourge that they helped create here in the United States and the exported to Latin American countries.

Edgar’s work primarily incorporates mixed media, bold colors, with the juxtaposition of grotesque imagery and whimsical elements. He creates art not only as a means of restless self-expression, but art activism. His works center in the issues affecting his native country, such as aid and El Salvador’s dependence on the United States. Much of his work also delineates the ongoing struggle for reproductive justice/ equality in the developing world.

Parlour 153 Artist Salon and is a forum for established artists, writers and other creative professionals to share works in progress. Participants have an opportunity to involve themselves in the creative process and contemporary issues.

Evidence of Things Not Seen Latino Art Collective is an artist collective that promotes the advancement of Latino artists in New York City.

An event part of The Wrong Biennale 2019.